Difference between revisions of "WhiteBird"

"WhiteBird" is the name of the Chelan County’s Advanced Vehicle Initiative Prius PHEV conversion which was finished in early October 2006. 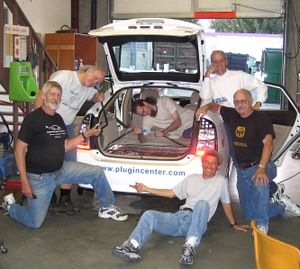 The build crew during the conversion of WhiteBird

Since the unprecedented success of the PHEV conversion of Ryan Fulcher’s PriusBlue at the Inaugural Maker Faire last year, with much help from CalCars<ref>http://www.calcars.org - California Cars Initiative</ref> and the San Francisco EAA<ref>http://www.sfeva.org - San Francisco Electric Auto Association</ref>. Ryan, a member of the Seattle EVA<ref>http://www.seattleeva.org - Seattle Electric Vehicle Association</ref> and a contributor to the EAA-PHEV web site<ref>http://www.eaa-phev.org - Electric Auto Association - PHEV Project</ref>, has been furthering the cause for PHEVs throughout the Pacific N.W. Through these public relations efforts, Ron Johnson-Rodreguez, head of Economic Development for Eastern Washington State’s Chelan County, contacted Steven Lough, president of the Seattle EV Association, and a fruitful working relationship has developed over the last 6 months. After several trips back and forth between Seattle and Wenatchee Washington, plans were set in motion to convert several county Toyota Prius vehicles to PHEV.

Both the PiPrius vehicles PriusBlue of Ryan Fulcher, and the just-completed Chelan County car, named “CCPort WhiteBird” utilize a PFC40H charger which doubles as a DC-to-DC converter. In DC-DC or run mode the PFC40 is connected between the add-on pack and the Prius OEM pack, thereby maintaining the Prius battery voltage during extended periods of low-speed exclusive (EV-Only) or higher speed enhanced (Mixed-mode) driving. In the system's final configuration, both DC-to-DC “boosting” of the Prius pack, as well as grid charging of the add-on pack are switched automatically. As the CAN-View reads data from the Toyota computer systems, it acts as both user interface and management device to orchestrate various aspects of the PHEV mode's automatic operation.

The Battery Management System (BMS) consist of a Mark 3 Rudman Reg for each of the 15 Genesis lead-acid batteries, which fully protect each battery from over- and under-voltage events. The regs help to direct the charger's actions and are interactive and programmable via a standard serial port (RS232) found on most laptops. 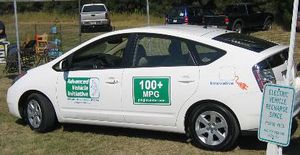 Chelan County’s Advanced Vehicle Initiative plans to use WhiteBird for display at events, conferences and festivals in addition to driving to and from meetings in Washington and other county business. In the future, they plan to create a fleet of plug-in hybrid vehicles for lease to potentially use for event shuttles, area tours, rafting shuttles, delivery services. We plan to monitor these vehicles for fuel efficiency, emission reduction, battery capabilities, charging speed, etc.