All Hybrid Battery Management Systems use Battery Taps to monitor battery integrity and voltage balance because a W:Battery Pack is only as strong as its weakest cell. Packs are made up of series strings of cells. Individual cells are arranged into modules or batteries, such a series arrangement increases the Voltage while the capacity (Amp Hours, Ah) remains unchanged. Most battery packs are simple single series strings, but other Battery Pack Configurations can be used.

Since each battery chemistry has a different cell voltage, it may not be possible to tap a replacement pack in the same manner as the original. However with a voltage divider or set of resistors the pack voltage can be made to emulate the taps no matter the particular dimensions or number of taps in the original pack.

As the battery taps are also used to measure full pack voltage, using a tap emulator also allows for other tricks such as State Of Charge Manipulation. 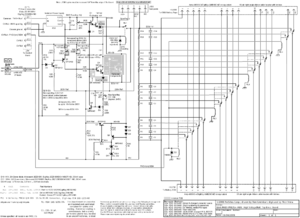 The Insight pack consists of 120 cells, 6 per module. I believe each pair of modules is tapped, for 10 subpacks.