From My wiki
Revision as of 21:19, 1 May 2008 by DavideAndrea (talk | contribs) (Added picture of guts)
(diff) ← Older revision | Latest revision (diff) | Newer revision → (diff)
Jump to navigation Jump to search

Initially, Canadian company Hymotion is offering the PHEV upgrade in two models: the 5kWh L5 for the Prius and the 12kWh L12 for the Ford hybrid SUVs. This innovation is not cheap, so the company is targeting fleet buyers before individual consumers. In quantities greater than 100, the Prius L5 is US $9,500; quantities over 1,000 drop the price to US $6,500. Other systems are under development for the Lexus RX400h, Toyota Highlander Hybrid and Toyota Camry Hybrid. 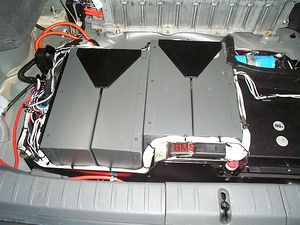 So Hymotion will sell 1000 units for $6,500 each, 100 units for $9,500, or a single (demostration) unit for $12,500 plus an undetermined installation charge or the option of self installation after receiving training. Hymotion and EDrive both go nearly the same distance at 31 vs 35miles, Hymotion is rated 5kWh and 40.9kg lighter than the EDrive at 9kWh, 1.8 times the energy at 1.56 times the weight.

While the battery type could make up the specific energy differance of 69Wh/kg versus 89Wh/kg the range discrepency is still odd. This could be due the SOC range used, though one would suspect that most of the capacity would be utilized as that's one of the things Lithium does well. Perhaps EDrive is being conservative on cycle depth, DOD, as I believe there is no stock battery to fall back on for HEV opperation in their case, while Hymotion could effectively discharge the additional Li pack till it fell off the end of it's abrupt discharge curve at 100% DOD, or 0% SOC.

Anyway, some Electric Conversion guys I know have mentioned that they think a simple "Hybrid battery", as it's known in the BEV world, type setup where a larger battery feeds the stock one would work, which Hymotion. seems to have confirmed. The PriusPlus or EDrive method still has the advantage of being able to replacing the stock NiMH battery with a far lighter Lithium flavored one!