Currently most of our electricity is generated from nuclear energy and from fossil fuels such as coal, oil and natural gas. In the future we should transition to use of sustainable, renewable energy sources such as wind, solar, tidal and geothermal to generate clean, green, renewable electric fuel for our electric vehicles. The intermittency of sunlight and wind requires methods for electric grid balancing (i.e. ensuring that the electric supply always matches the electric demand) to help avoid electric power blackouts.

PHEVs of the future should be manufactured with flexfuel engines to enable second generation renewable biofuel to be used as their primary or sole source of liquid fuel. This would help eliminate use of dirty fossil fuels in transportation. 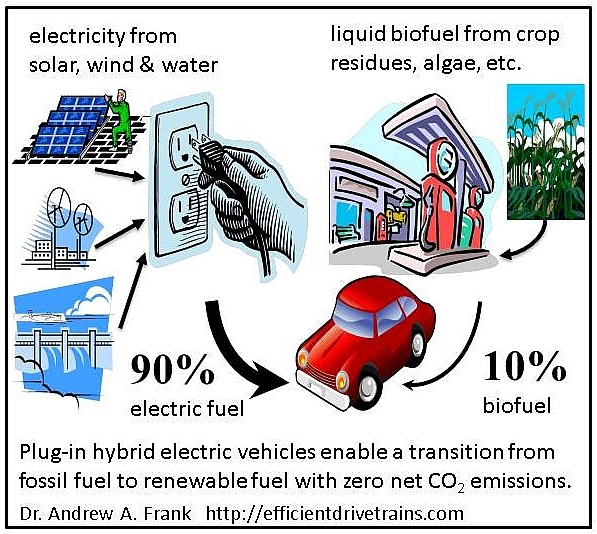 Solar photovoltaic (PV) panels on home & business rooftops and on parking lot structures are increasingly used for charging of all plug-in electric vehicles (PEVs, BEVs, PHEVs). This is known as the PV4EV strategy. During the initial payback time the solar panels reduce the monthly electricity costs to eventually repay the costs of installing the solar panels. After that time owners get many years of no-cost electricity for running their electric vehicles, homes and businesses.